This butternut squash soup is wonderfully velvety, with just the right amount of sweetness to go with that big flavor. Plus there is a special ingredient that countries that make curry use so well… it’s the ‘magic’ that makes a vegan squash soup taste so creamy and amazing!

We love that you can take a naturally healthy ingredient like the butternut squash and make it sing with just a few simple ingredients. It’s like magic! 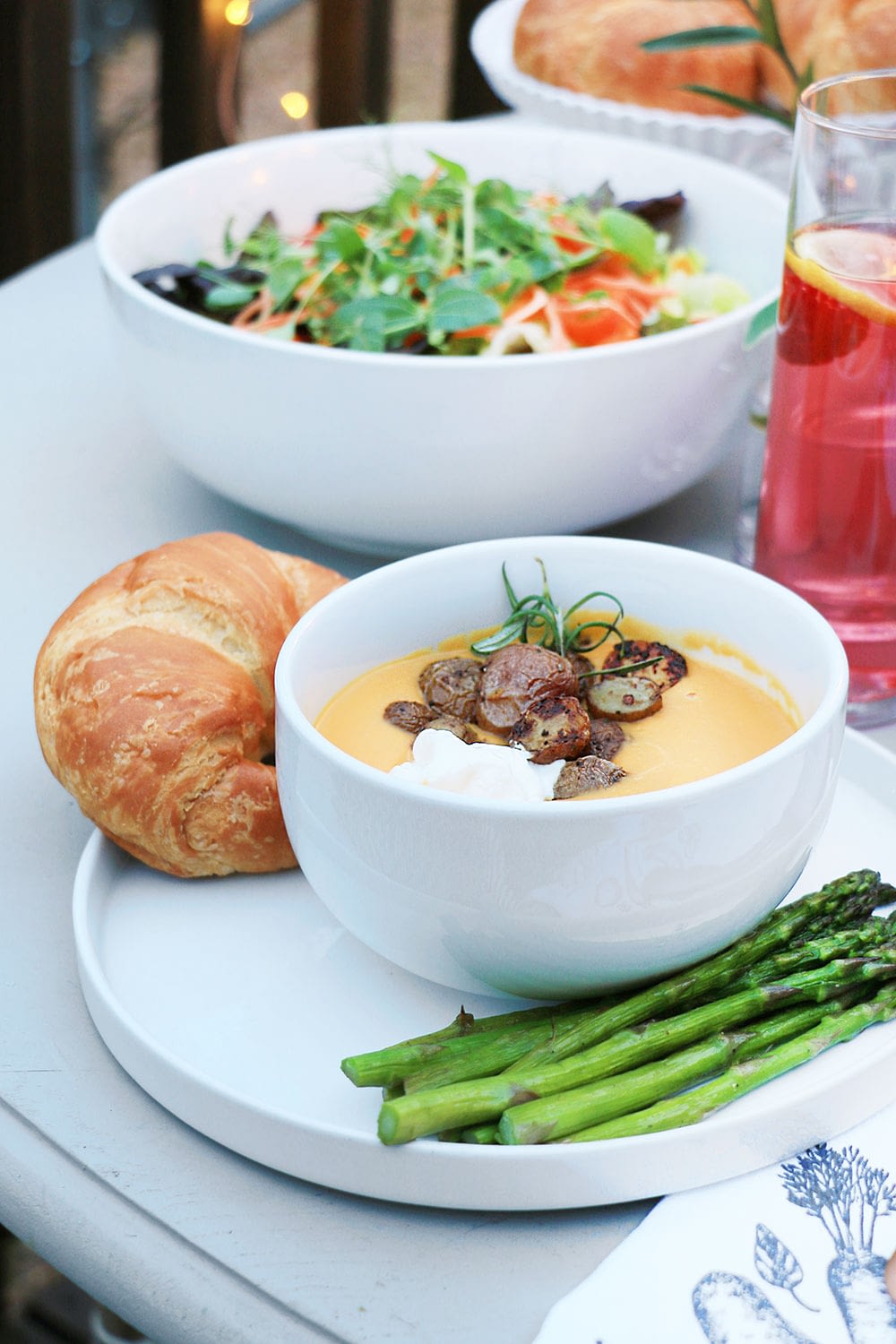 We love this soup with roasted potatoes and veggies for a great summer spread.

I had no idea I would like butternut squash soup. I’m not a big fan of squash in general. Maybe it’s the texture, often becoming waterlogged when boiled, or stringy and mushy at the same time when baked too long…blegh. Or it could be that the flavor never really impressed me.

So you can imagine my shock when I had some sweet flavorful butternut squash soup at a high end restaurant in New York. So this is what butternut squash soup was supposed to taste like! Every store bought (and dare I admit it, homemade) version I’d had left my taste buds thoroughly unimpressed. But this was heavenly! This I knew I had to reproduce, but in my own vegan version.

This recipe is so easy to make…just the way I like all my meals to be. The majority of the time spent is just in boiling the squash. Let’s be honest, that isn’t any work at all, unless you like to sit and watch a pot boil. It is however the most important step in this recipe. If you don’t boil it long enough so that the squash practically falls apart when you poke it, then it will not have the best flavor or texture. You want a creamy soup that stays creamy the next day (if you have any leftovers). If you don’t boil it long enough, with each piece properly submerged, the soup will be grainy and clumpy.

You wouldn’t imagine so few ingredients would produce such big flavor, but it doesn’t take much to amplify the natural flavor of the butternut squash.

How To Cut The Butternut Squash

In preparation to boil the squash, wash the skin really well and remove any stickers. We’re boiling it with the skin on to help hold it together after it is removed from the water. I cut a few slices off the top neck portion, then slice the middle in half so I can spoon out the seeds.

After it is thoroughly boiled, so that the inside practically falls apart when you poke it with a fork, use tongs to carefully remove it from the pot. Place the pieces on a cutting board so you can cut away the skin from around the neck piece of the squash. The middle part you can just use a spoon to scoop the meat of the squash out and place in your blender.

Then it really is as simple as blending the ingredients all together while the squash is hot, and serve!

The Secret Sauce That Makes It So Good

Whatever you do, don’t leave out the coconut milk. It is that naturally creamy element that makes for this incredibly velvety texture, and although it doesn’t taste like coconut is in it, this gives it a naturally rich flavor. Think about curries…coconut milk is the base that balances the flavors of the slightly sweet and savory elements. You wouldn’t ever know it was there (even if you hate coconut), but it makes almost all curries what they are. It’s the same with the butternut squash soup. It is the ‘secret sauce’ that makes it so tasty and creamy.

As for the chicken-style seasoning, I have used many different ones to make this soup with great success (although you may have to adjust your salt to accommodate). But my favorite to date is the Better Than Boullion chicken-less seasoning. Be careful though, they have a chicken version and a vegetarian chicken-less version!

The tricky part with this recipe is making sure you add just the right amount of brown sugar and salt. Every squash is going to be a different size, sweetness, and richness of flavor. I have successfully made this soup delicious with less than stellar squash. If necessary, add a little more sugar if the squash is not sweet enough, and both extra sugar and salt to taste if it is a large squash.